This past week and half has been pretty chaotic between finding my around LA and the studio. This past weekend was the first one in a long time where I didn't get out of bed before 7am and didn't have any driving to do. Later in the evening I went to Chinatown. I know I shouldn't have been surprised that LA has a Chinatown but I was. I had real steamed dumplings, that's the great thing about being near a city that is on the ocean, all of the cultural diversity. All sorts of little communities form around the city. I live in an Hispanic neighborhood but two blocks south is a small Korean community. This does mean however, that the little Hispanic woman who lives two doors down enjoys waking me up, with her dulcet voice that proclaims "Tamales!". Over and over and over at from about 6:30am to 7:00am. Who needs an alarm clock?

Something I have noticed about LA is the bombardment of advertising. Billboards, road, newspaper, park benches, and t-shirts. Either has a label out here. I notice most of things on my way to work which being 45 minutes allows me lots of chances to see what's around especially with all of the stopping and starting. It's not the advertisements that offend me but rather what they are about. 1-800-GET-THIN, Best Buys for Purses, Clutches, and Bags, Ovation Cell Therapy Yes, you too can have thick gorgeous hair. For such a health conscience area, organic food is everywhere along with herbal remedies for any aliment, lap bands and chemicals to give you stronger hair don't seem too health to me. Maybe my feminist side is coming out, maybe my sarcastic East Coast mentality is playing a role, or maybe I have a photo story? 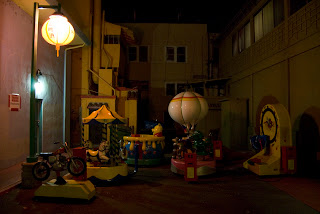 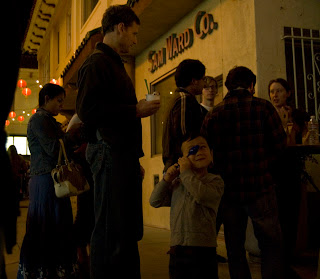 Posted by brittney lohmiller at 4:51 PM No comments: